We landed on the ruins of Angkor Wat after researching the best ancient temples in the world. Angkor Wat means “temple city” and we were blown away by over 70 different shrines throughout the vast complex and each mesmerizing temple leaves you with a feeling of euphoria. These crumbling and magnificent stone ruins give way to hand-carved temples featuring climbing trees, enormous arches, hundreds of smiling deities and dancing Shivas. The relics are world-renowned and over two million visitors travel from all over the world to visit this famous world heritage site every year.

Our adventure to Angkor Wat began with a short hopper flight from Phnom Penh to Siem Reap. The most surprising cultural change in Cambodia was that walking was not encouraged. We walk the streets of New York City every day, but it can be dangerous to walk the dirt roads in Cambodia with over 6,000 tuk-tuks buzzing around. Visitors can travel by tuk-tuk by simply waving one down as you would a taxi and negotiating price if you are successful at communicating in their official language of Khmer. Another option is to download a tuk-tuk rideshare app that would eliminate negotiation or competing with other visitors for a tuk-tuk. After landing in Siem Reap, we called our ride and after walking outside of the airport boundaries we were off in a tuk-tuk that drove us down a crowded road humming with energy.

A quiet dirt path led us to our homestay which surprised us with spacious amenities and paved walkways. Highlights of our homestay include a serene outdoor pool with a bubbling waterfall and an outdoor common area filled with blooming flowers. The pool came in handy after we walked around sandy ruins and the simmering jungle for hours. For the complimentary breakfast, you should order the Cambodian rice soup, called “congee” in Khmer. It’s not your typical state-side breakfast, but I promise, you won’t regret it. We walked to the local brewery a few houses down and shared a beer with some chatty, vibrant residents before calling it an early night.

An early wakeup call was not ideal, but our tour guide assured us that it would be worth it. The small group tour included transportation and they picked us up at our homestay doorstep around 4am. We explored the temples with a small group of tourists who traveled from Australia, Iraq, and Scottland. It is always fun learning from other wanderers and we were happy to have the company. Most tours do not include entrance to the temples and stop at the ticket station for you to purchase your tickets on the day of the tour. Book your guided tour a few months before your trip because they sell out early. The fluorescent sunrise featured on travel magazine covers occurs during the summer months, but that is also the rainy, monsoon season. You can make a safe call by visiting in the dry season, between November and April, when the weather is cooler and there is little chance for cancelation due to rain.

After stopping to purchase our tickets, a dark and bumpy road took us to the first stop of our tour where we were to watch the sunrise over the peaks of Angkor Wat. The famous five peaks were built before 1150 and represent the enormity of the universe and it was a truly magical experience. Hundreds of people waited to witness the sunrise, but there is no bad view so there is no need to worry about the crowds. As the sun slowly crept up it revealed dozens of surrounding ruins and temples. It is then that you realize the expansive wonder of these shrines and can picture the thriving cities and celebrations they once held. We walked through the sunlit temple of Angkor Wat to view four deep, wide baths, multi-level shrines shining from an early-morning glow, and a hazy jungle landscape surrounding the temple. The sounds of cicadas roared in the background as monks quietly worshipped inside.

The temples are far apart, and you can view Angkor Wat by foot or bicycle, but I was thankful for our airconditioned car as a haven from the heat. After a quick breakfast we took a quick drive to Ta Prohm, a temple known for trees that flourish on top of the ruins. A four-sided buddha head greets you as you walk into the temple. Long roots cascade down the crumbling grey stone and make themselves at home in the grooves of the temple walls. It’s easy to get stuck in large crowds that gathered along the narrow walkways and small chambers, so we quietly explored off the beaten path. A small face of a humble buddha poked through the roots of a tree and seemed to wish us safe travels we departed.

After the quick cool off in the van we arrived at Bayon which is known as the temple of a thousand faces. This was my favorite temple because of the winding staircases and stunning arches adorned with humble faces who smile down on all who traveled so far to see them. There were multiple levels inside and the pillars, walkways, stairwells and ceilings were all adorned with hand-carved, unknown deities. If you are making the journey to Angkor Wat you must put this temple on your bucket list. We were in awe of this expansive temple and spent a good bit of time exploring the ruins before a surprise stop that was not mentioned on the tour website.

We passed over a handmade moat, bridge and the intricate North Gate on our way to Bayon. The North and South Gates were built to protect the ancient city of Angkor Thom which holds many temples and historical landmarks, including Bayon. The stone faces lining either side of the Bridges crumbled long ago, but the South Gates statues were restored to their former glory. We walked the dusty pathway and marveled at the statues. The gate arches feature a small replica of the carved peaks and humble faces held throughout Angkor Wat. A group of macaques monkeys greeted us on the way out of the complex and with this final act, our temple adventure came to the best ending ever written.

We realized how incredibly far we had come to explore something so magnificently sacred as we swam in our homestay pool and explored the night market that evening. Hundreds of wars, kingdoms, religions, and dynasties did not destroy these temples. They exist not only as places of worship and celebration, but also as a testament to how vast and beautiful the world truly is. You will never forget these historic landmarks and the humbling tranquility you feel when walking through temples and towns that are still thriving to this day. Siem Reap and Angkor Wat were the inspirations for our two-week trip through Southeast Asia. I left this small town with a full heart and continue to carry the humbling and peaceful presence of Angkor Wat with me everywhere I go. 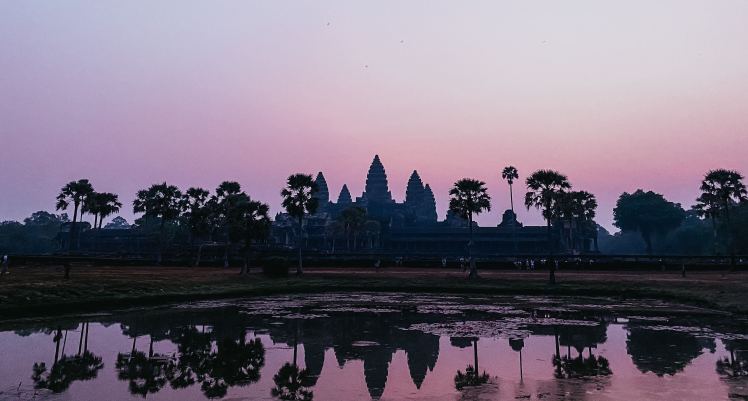 One thought on “Explore the Temples of Angkor Wat”

Search for a Blog

Inhale: I am plenty.
Are we at Outback? Cus these cherry blossoms are bloomin’ 🌸 #imtheworst
Hi, new friends! I’m Kay 👋🏻 I’m a minimalist travel blogger living in New York City. I spent last year traveling around the states, and Asia before COVID hit, with my partner. I’m settling back into the daily adventure of living in the city that never sleeps while still traveling safely 😷. I created East Coast Dreamer to share attainable travel tips, my mental health journey, and how to have less and do more. Let’s connect and experience more with less✨
Here’s a pic of me exploring the coasts of Ireland with rain-soaked hair, wet mascara, and a big ole smile on my face. Cheers to finding better luck (and pots of gold) in our future, but keeping a smile on our face until we stumble upon that rainbow 🍀🍺🌈
We are the product of our environment. Learning how to ebb and flow with our environment, separate from what does not serve us, and gravitate towards objects, people, and experiences that align with our vibrations are the foundations of living a fulfilling and happy life.
If you were able to move anywhere in the world where would you go? I love living in NYC, but live for the little glimpses of nature when on vacation.
‘Together, we will build a home filled with learning, laughter, and compassion.’ When we wrote these vows 5 years ago, building a family was in the back of our minds. I walked by a mom and her daughter yesterday and I cried for the first time in a while. At first, it felt like a set back. I was “doing so well” by not crying, or even thinking about, our miscarriage.
Looking through old photos this morning, I realized how blessed I am to be surrounded by so many loving, caring, hilarious, kind, and inspirational women. The women in my life are working with kids, raising their own children, shattering glass ceilings, starting their own businesses. I’ve known some of these beautiful people for nearly two decades and helping one another grow is my greatest joy in life.
Loading Comments...
Comment
×
%d bloggers like this: